Traditional/Biblical Marriage: The Exegesis Behind the Text

The traditional/biblical presentation of marriage as an exclusive union between one man and one woman is not a prejudiced, superstitious, patriarchal, or arbitrarily derived concept.  The below provides an analysis of the amazingly beautiful, architectonic design of marriage by the Creator as found in the creation narrative of Genesis.  Rarely is a full exegetical analysis, including literary and structural analyses, of the Hebrew text made available in a blog post due to its technical nature.  However, in view of today's Supreme Court verdict, those with questions about this issue to need to understand the unambiguous testimony of the Scriptures on both gender and marriage.  Most of the technical material is provided in footnotes.  To those unfamiliar with either exegesis or Hebrew language, this will be challenging.  However, I encourage you to carefully work through the below post until it is clear for you.  Feel free to respond with questions.

The key biblical passage speaking to the uniqueness of human beings is found in Gen 1:26, 27, which locates their inherent dignity and worth in their design pattern.  The structure of the text[1] suggests that humans possess unique characteristics mirroring God’s characteristics in such a way and to the extent, that humans are themselves sacred, though on a finite or limited scale.  In effect, this design makes them as much like God as a created being could be.[2]  Further, the presence of this design pattern, although marred by the effects of sin (Genesis 3), prevails even in sinful humans so that to murder a human warrants the most exacting penalty as identified by the key biblical passage prohibiting murder (Genesis 9:6).  This uniqueness is further appealed to as the basis for why humans ought not to even be desecrated by profane speech (James 3:9).

The image of God is best reflected in the complementary features of gender distinction as described in Genesis 2:18 and expanded by Genesis 5:1.[3]  Here, the importance of relational and gender diversity by a human pair bond[4] is highlighted as a feature attracting the Designer’s special creative interest.  In all his uniqueness as a creature reflecting the image of God and relating with deity, man’s relational and chromosomal solitude was identified as an incomplete and less than ideal, i.e. “not good” design and relational state (Gen 2:18, 20).  The Creator’s solution to the problem was to create a single complement reflecting corresponding qualities that would correlate with and complete the male in the similar yet different person of the human female.  Together, the male/female design most fully reflects the image of God (Gen 5:1, 2)[5] and provides the constituent elements necessary to further procreate the image of God in the persons of other human beings (Gen 5:3).  The result is that at conception, the fundamental blueprint for the image of God, in embryonic form, is assimilated and reflects even in its most basic state the glory of the Creator.

The special and exclusive relationship of the adult human male and female joined together as husband and wife (Gen 2:24, 25) is identified as the most fundamental and basic human relationship.  This relationship is said to have been designed directly by God and serves as the sole basis for a distinct family unit in perpetuity (Gen 2:24, 25; Gen 4:1, 17) and is even intended to be interminable except under specific, extreme circumstances (Matt 19:8).

Notice the structure of Genesis 1:27-28 (most visible in Hebrew). These verses represent a four line quatrain where the “image of God” in line A is repeated in line B, and is then epexegetically explained with the complementarity of the  זָכָ֥ר וּנְקֵבָ֖ה“male and female” of line B’.  The couple is then blessed by God in line A’ as the two waw-consecutive verbs initiating verses 27 and 28 constitute a wordplay utilizing the device known as paronomasia (sound play).  Explanation of the graphic: i. The typical way to describe a chiastic structure as above is A, B//B’, A’ where the two internal lines correspond, as described here.  ii. Notice the athnach at the end of line B showing the logical middle of the section. iii. Observe the chiastic structures of lines B and B’ showing the correspondence of בְּצֶ֥לֶם with זָכָ֥ר וּנְקֵבָ֖, both in blue, and then the correspondence ofבָּרָ֣א אֹת֑וֹ  with בָּרָ֥א אֹתָֽם demonstrating the “image” (grammatically singular) is in the form of “them” (grammatically plural).  This shows that the image of God is most fully represented in the complementarity of the male and female. iv. In verse 28, God then commands the couple to procreate and subdue the Earth, i.e. gives them the creation mandate.

[2] The uniqueness of the design of “mankind” (אָדָ֛ם) in Gen 1:26, is highlighted by a poetical device called hendiadys implemented in God's intra-trinitarian conference.  In Gen 1:26, God expressed His creative intentions.  We read וַיֹּ֣אמֶר אֱלֹהִ֔ים נַֽעֲשֶׂ֥ה אָדָ֛ם בְּצַלְמֵ֖נוּ כִּדְמוּתֵ֑נוּ. "And God said, 'Let us make man (אָדָ֛ם) in our form, according to our image."  The idea seems to be that God intended to make man as much like God as a created being could be.  This was not necessarily a reference to his physical form, but to his spiritual, emotional, moral, volitional, rational, relational, governmental, etc. qualities.  This imago Dei, or image of God, is what gives man dignity.  This is what makes him unique. Note, however, that in Genesis 1:26, the term translated “man” (אָדָ֛ם) is indefinite.  This is a general statement about mankind/humankind.  However, in v. 27, the definite article is used as a constituent part of a chiastically arranged quatrain (see above) explaining what this “image” is.  This use of the article (i.e. anaphoric use) happens when the article of specificity refers back to an anarthrous substantive “in the preceding context” (Frederic Clarke Putnum, Hebrew Bible Insert, Quakertown, Pa: Stylus, p. §1.4.3a).  Here, the definite הָֽאָדָם֙ in 1:27 is used to refer back to the “image of God” (אָדָ֛ם) mentioned in 1:26.  This only happens because the image is further explained (epexegetically) in the lines following 1:26.  Outside this quatrain, the definite article is employed only in specific reference to “the man,” i.e. to Adam specifically, whereas each time humanity is referred to, no article is employed.

[3] The description of the imago Dei as “most fully reflected in the completed male/female human archetypes,” does not mean that the image of God was not present in the isolated Adam.  But Adam as “mankind” was incomplete while he was yet alone with the result that the image was not as full.  I.e. the image was present, but not as fully present as when Eve was created as his complement.  This pair represents humanity archetypically, as even expressed in their names.  Adam’s name אָדָ֛ם, shows the origin of the human race from the Earth (adamah), and Eve’s Hebrew name חַוָּ֑ה (Chawah), related to the Hebrew verb hyx (chayah), meaning to be “alive,” shows her standing in relationship to subsequent humanity.  The result is explained thus: “Now the man called his wife's name Eve, because she was the mother of all the living (Gen 3:20).  The above does not minimize the status of a single individual or widow/widower.  Remember, though, that in God’s original design, there was no death and therefore a widow or widower was not part of God’s original design.  Likewise, there were no single individuals and it should be noted that except in rare cases, humans do not prefer to be alone.  This is why Paul refers to some individuals who are content in this condition as being especially gifted.  Remember, fully, sexually mature, properly functioning humans have sexual and other relational yearnings, and do so by design.  Outside of a marriage relationship, they have no legitimate means of expressing the sexual aspect (at least) of their design.  It should also be remembered that the above is similar to discussions related to the imago in physically or cognitively malformed humans, or in immature humans.  In the case of the first, they possess the imago, however, due to the corrupting influence of sin and the resulting degenerative impact of sin on humans biologically, the image is marred.  In the case of immature or pre-born humans, their image is in immature or in embryonic form.  To be clear, deformed or malformed humans reflect the image of God, but that image is not as full as in normal, fully developed humans.  Further, normal, healthy humans do not reflect the image as fully as did pre-fall Adam and Eve.  Even more, single individuals reflect the image of God, but not in the fully relational sense in which the male/female archetypes did.

[4] The phrase “pair bond” is intended to highlight the 1-to-1 relational nature of marriage, i.e. “pair,” which inherently precludes multiple partners, such as in polygamy or polyamory.  Additionally, it assumes that the two individuals involved are sexually mature adults, precluding the participation of 1 or more non-adults in marriage, where “adult” requires at least sexual and cognitive maturity.

[5] In Gen 5:2, the image of God is more fully explained.  Here, “man” or “mankind” (אָדָ֛ם) is summarized as the male and female genders of His creation (see diagram below).  To be clear, the most full expression of the image is reflected in the prefall representation of “mankind” as the “male/female” archetype. 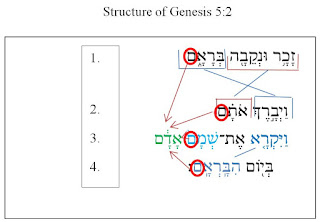 Comments: i. Notice the athnach showing the logical middle of the verse at the end of the 1st line.  Also note the chiasm, which confirms the division. Line three is indicated by: a.) the rebia over אֹתָ֗ם, and b.) the beginning of the waw-consecutive verbal clause. ii. That next verbal clause contains the appositional relationship שְׁמָם֙ אָדָ֔ם, where the male-female duet constitutes “mankind” singular. In other words, “They” plural were called “adam/man/mankind” singular. The point is that they, “mankind” were created as male and female when they were created. The zaqqeph qaton shows the next dividing point, and the partial chiasm of the next line confirms that dividing point. iii. The partial chiasm of the fourth line uses the plural pronoun “they” as a reference back to the singular noun translated “adam/man/mankind.”  This final structure again demonstrates that “they” plural constitute “man” or “mankind” singular.  iv. Notice that all the pronouns are plural but summarized as “mankind/אָדָ֛ם”.  This “mankind/אָדָ֛ם” was made “male and female” in the day that they were created.  This is the same אָדָ֛ם described in Gen 1:26.  In other words, in Genesis 1:26, when God said “Let us make man [אָדָ֛ם]” in our image, he was referring to the completed product represented in the male/female counterparts.

R. Brian Rickett:
is Campus Administrator and Professor of Biblical Studies at the BMA Theological Seminary's Conway, Ark. campus, as well as the founding Pastor-teacher of the Bible Church of Beebe, in Beebe Arkansas. His pastoral ministry interests lie primarily in faithfully fulfilling the goals given to the New Testament minister in Scripture, emphasizing: expository preaching, evangelism and applied presuppositional apologetics, discipleship and nouthetic counseling. His academic interests lie primarily in the application of original language Bible exegesis to theological systems, worldview issues, and philosophic thought, with the ultimate goal of seeing Christ's Kingdom expanded, as all is brought into submission to Him. For The Bible Church of Beebe, see here: www.bcbeebe.org; for the BMA Theological Seminary, see here: www.bmats.edu Note: Views on this page do not necessarily represent those of any affiliations referenced. All site material copyright © R. Brian Rickett; all rights reserved.