On Monsters and Makers: A Consideration in View of the Season

When I mention the name “Frankenstein,” odds are you immediately recall a black and white classic movie, which contains a mad scientist in a white lab coat and a large, stiff, unwieldy monster with screw like knobs sticking out of his head.  Or, you may think of a color version where the monster is green and the scientist is giddy over the moment where the monster comes to life. 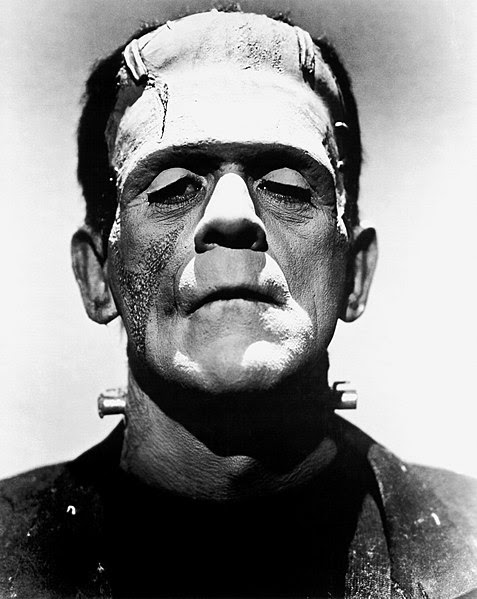 The actual, original story, however, is a very well done and thrilling novel worthy of a classic, and which contains a compelling narrative between the monster and the scientist where the monster attempts to persuade Frakenstein, the scientist, of his inherent responsibility to him.  He does this by contrasting his own situation with that of the biblical Adam, the original created man.  Below is a section of that compelling narrative:

Monster: “I entreat you to hear me before you give vent to your hatred on my devoted head. Have I not suffered enough, that you seek to increase my misery? Life, although it may only be an accumulation of anguish, is dear to me, and I will defend it. Remember, thou hast made me more powerful than thyself; my height is superior to thine, my joints more supple. But I will not be tempted to set myself in opposition to thee. I am thy creature, and I will be even mild and docile to my natural lord and king if thou wilt also perform thy part, the which thou owest me. Oh, Frankenstein, be not equitable to every other and trample upon me alone, to whom thy justice, and even thy clemency and affection, is most due.

“Remember that I am thy creature; I ought to be thy Adam, but I am rather the fallen angel, whom thou drivest from joy for no misdeed. Everywhere I see bliss, from which I alone am irrevocably excluded. I was benevolent and good; misery made me a fiend. Make me happy, and I shall again be virtuous."

Frakenstein: “Begone! I will not hear you. There can be no community between you and me; we are enemies. Begone, or let us try our strength in a fight, in which one must fall."

Monster: "How can I move thee? Will no entreaties cause thee to turn a favourable eye upon thy creature, who implores thy goodness and compassion? Believe me, Frankenstein, I was benevolent; my soul glowed with love and humanity; but am I not alone, miserably alone? You, my creator, abhor me; what hope can I gather from your fellow creatures, who owe me nothing? They spurn and hate me. The desert mountains and dreary glaciers are my refuge. I have wandered here many days; the caves of ice, which I only do not fear, are a dwelling to me, and the only one which man does not grudge. These bleak skies I hail, for they are kinder to me than your fellow beings. If the multitude of mankind knew of my existence, they would do as you do, and arm themselves for my destruction.” --Mary Wollencraft Shelley, Frakenstein: A Modern Promethius (London: Lackington, Hughes, Harding, Mavor & Jones, 1818. 280 pp.)

One of the enduring subjects of contemplation by thinkers, philosophers, writers, ethicists, theologians, etc. has to do with the subject of the relationship between the creature and his maker, or what is sometimes referred to as the creator-creature distinction/relationship and the corresponding implications of this relationship.  The selection above captures some of the pathos and angst unique to a sentient, created being out of fellowship with his author.  This seems to have been in Shelley's mind as she composed her story.  In fact, on the original cover of the book, there appeared a quote from Milton's Paradise Lost, which gets at the heart of this angst.  It reads:

“Did I request thee, Maker, from my Clay
To mould me Man, did I sollicite thee
From darkness to promote me….” —John Milton

In a later edition (1831), Shelley described how she came to envision her project.  She stated,


"I saw the pale student of unhallowed arts kneeling beside the thing he had put together. I saw the hideous phantasm of a man stretched out, and then, on the working of some powerful engine, show signs of life, and stir with an uneasy, half vital motion. Frightful must it be; for SUPREMELY frightful would be the effect of any human endeavour to mock the stupendous mechanism of the Creator of the world."

Most humans, it would seem, recognize, or at least intuit the uniqueness of man among God's creations, and so this idea shows up in many classic works of fiction.  When twisted, this idea becomes compelling material for the horror genre.  For example, in H.G. Wells' The Isle of Dr. Moreau, Pendrick questions the doctor as to his choice of the human to serve as the model of his vivisecting--the practice of surgically reshaping live animals into alternate forms.  Pendrick states,  “I asked him why he had taken the human form as a model. There seemed to me then, and there still seems to me now, a strange wickedness for that choice."  This choice adds a sense of dark horror to the story which the reader naturally intuits as somehow sick.

Such a practice seems sick, but why?  The reader has the sense that some lines have been crossed, but what lines?  Wells had this sense, and so put the appropriate description into the mouth of Pendrick.  He described such a practice as a "strange wickedness."

The Bible solves this conundrum for us.  It gives special attention to the uniqueness of man and shows his special position as the supreme and final product of God's creative work.  Additionally, though, the Hebrew account records the uniqueness of the design when a poetical device, called hendiadys, is implemented in God's intra-trinitarian conference, where He expressed His creative intentions.  In Gen 1:26, we read: וַיֹּ֣אמֶר אֱלֹהִ֔ים נַֽעֲשֶׂ֥ה אָדָ֛ם בְּצַלְמֵ֖נוּ כִּדְמוּתֵ֑נוּ. "And God said, 'Let us make man in our form, according to our image."  The idea was that God intended to make man as much like God as a created being could be.  This was not necessarily a reference to his physical form, but to his spiritual, emotional, moral, volitional, rational, relational, governmental, etc. qualities.  This imago Dei, or image of God, is what gives man dignity.  This is what makes him unique.

This uniqueness also serves as the prohibition for murder in Gen. 9:6, which not surprisingly employs a bit of poetry, too, called chiasmus.  That passage reads: שֹׁפֵךְ֙ דַּ֣ם הָֽאָדָ֔ם בָּֽאָדָ֖ם דָּמ֣וֹ יִשָּׁפֵ֑ךְ כִּ֚י בְּצֶ֣לֶם אֱלֹהִ֔ים עָשָׂ֖ה אֶת־הָאָדָֽם׃. "Whoever sheds the blood of man, by man his blood shall be shed, for in the image of God, He made man." My translation has intentionally maintained as much of the Hebrew word order as possible to show this device.  This image, the imago Dei, is so important, that in the NT, James references this as the grounds for the prohibition against even cursing men (James 3:9, 10).  Man's material/immaterial image is peculiarly unique, and so tampering with him is peculiarly heinous.  It is a "strange wickedness."  This heinousness is something that we all seem to intuit, and so makes compelling subject matter for the horror genre.

The dark stories opening this post highlight the fascination men have with imitating God in His work as original Creator and Designer.  They also reveal the dual sense of intrigue and repulsion we feel about the defacing, distorting, and disfiguring of God's handiwork in practice or in principle. Additionally, though, such stories serve as cautionary tales about both the sickness of such work and the potential trouble men may get into when engaging in such diabolical activity (diabolical because they seek to usurp the Creator's reserved right to create and design life, and play with the sacred imago Dei).

In another sense, though, the above stories may be used to highlight, by way of analogy and contrast, some of the unique characteristics of the original, biblical, Creator.  Just as we are repulsed by perversions, we are attracted by truth.  Below, I've provided some contrasts between Shelley's novel and the biblical account.

Book: The monster, because of his inherent ugliness is despised by his creator.         Reality: In our natural state, we were created in beauty and love.

Book: The monster, deformed by his creator's limitations, longed for fellowship with his author, but was despised by him.
Reality: The creatures, deformed by their sinful rebellion, despise their perfect Creator who pursues them in mercy and grace.
Book: The monster pleads with his creator but finds he is despised and his pleas ineffective.
Reality: The benevolent Creator issues a general call to all men, to repent and turn, to come to Him and have their sins forgiven, and image restored.  He also issues an effectual call regenerating and restoring some to himself.  Our Creator pursues us in spite of our loathsome corruption.

Book: In the narrative, the monster knows he is a monster.
Reality: In reality, men suppose themselves to be gods and imagine that they are actually the authors of deity.

Book: In the book, the monster is persecuted by human beings who seek to kill him.
Reality: The Creator, sacrificially coming into the World to save humanity, was crucified and murdered by His monstrous subjects.

Book: Is a fiction
Reality: This is history

For monsters like us, though, the Creator has provided a way of salvation in Christ.  "And you were dead in your trespasses and sins, in which you formerly walked according to the course of this world, according to the prince of the power of the air, of the spirit that is now working in the sons of disobedience.  Among them we too all formerly lived in the lusts of our flesh, indulging the desires of the flesh and of the mind, and were by nature children of wrath, even as the rest.  But God, being rich in mercy, because of His great love with which He loved us, even when we were dead in our transgressions, made us alive together with Christ (by grace you have been saved), and raised us up with Him, and seated us with Him in the heavenly places in Christ Jesus, so that in the ages to come He might show the surpassing riches of His grace in kindness toward us in Christ Jesus" (Eph. 2:1-7).

R. Brian Rickett:
is Campus Administrator and Professor of Biblical Studies at the BMA Theological Seminary's Conway, Ark. campus, as well as the founding Pastor-teacher of the Bible Church of Beebe, in Beebe Arkansas. His pastoral ministry interests lie primarily in faithfully fulfilling the goals given to the New Testament minister in Scripture, emphasizing: expository preaching, evangelism and applied presuppositional apologetics, discipleship and nouthetic counseling. His academic interests lie primarily in the application of original language Bible exegesis to theological systems, worldview issues, and philosophic thought, with the ultimate goal of seeing Christ's Kingdom expanded, as all is brought into submission to Him. For The Bible Church of Beebe, see here: www.bcbeebe.org; for the BMA Theological Seminary, see here: www.bmats.edu Note: Views on this page do not necessarily represent those of any affiliations referenced. All site material copyright © R. Brian Rickett; all rights reserved.